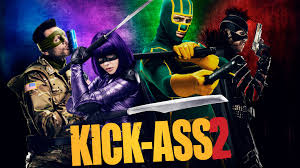 Matthew Vaughn’s original Kick-Ass film came out during the peak of the superhero movie craze with a pretty interesting take on the genre: what would happen if realpeople in the real world tried to dress up in costumes and fight crime? It was often quite funny and with some really well directed action sequences, but what was frustrating was just how often it was willing to abandon its central premise. The whole idea is to set this in the real world, but then in the next scene, we’re watching one of the main characters fly across the city in a jet pack.

That sort of thing makes for a fun movie, but it completely goes against the realistic tone the rest of the film is trying so desperately to strike. Kick-Ass 2 is a decent enough sequel, but it shares the same frustrating problems as the original, this time cranked up to 11. Once again we have scenes with characters telling us “This isn’t a comic book, this is real life!” But when we’re watching a 15-year-old girl beat up a whole crew of bad guys while dangling on the roof of a car, it sure feels like a comic book.

Taking place not long after the events of the first film, Kick-Ass 2 opens up as Mindy (Chloë Grace Moretz) is being forced into a normal life in high school by her new guardian, Marcus (Morris Chestnut.) But while Marcus thinks she’s going off to high school, she’s actually sneaking off to beat up bad guys as her superhero persona, Hit Girl, carrying on her father’s legacy. Kick-Ass himself (Aaron Taylor-Johnson), no longer fighting crime, is quickly sucked back into the field by Hit Girl, and soon joins up with a new legion of heroes, lead by Colonel Stars and Stripes (Jim Carrey.)

Despite its problems, what the first movie did well was establish a real set of stakes, showing us that bad things can actually happen to these people. Main characters aren’t invincible; sometimes they go up against the bad guys and lose, badly. Kick-Ass’ very first fight in the original movie lands him in the hospital with serious injuries for weeks. That’s a great scene because yeah, in the real world, you don’t just pick a fight with a bunch of guys and magically win because you’re the hero of the story.

Most of those stakes are gone from Kick-Ass 2. Though the action set pieces are still fun, at no point do we feel like the main players are in any sort of real danger. By a certain way into the movie, it’s clear the franchise has totally abandoned its central premise, devolving instead into a simple action series about people dressing up in costumes and beating each other up. On that level, Kick-Ass 2 is actually somewhat entertaining. A final battle, which feels a lot like a bunch of nerds fighting each other at Comic Con, is quite fun. But you can’t have a scene that ridiculous, followed by a scene that tries to convince us that there is any sort of universe where something like this would really happen.

Both Kick-Ass films are comedies first and foremost, though. The first movie’s humor mostly revolved around the shock value of seeing a 10-year-old girl swearing and beating guys up, and the pure originality of the central premise, with some clever dialogue mixed in. Naturally in Kick-Ass 2, the shock value is gone. It’s still occasionally quite funny, with some of the clever dialogue that characterized the original movie. But just as often, the humor in this movie is just so downright juvenile and stupid, with plenty of scenes full of grade school level toilet humor straight out of an American Pie or Scary Movie sequel.

Mark Millar, author of the original source material, often feels like he’s writing exclusively for 14 year old boys, and while the first movie wisely ignored a lot of Millar’s horrific writing which simply tries way too hard, this movie too often revels in it, with plenty of jokes about gays, sex, rape, and practically anything else you can think of, like the movie is waving its hands in the air desperately trying to get our attention.

When the movie is willing to calm down and take the story surrounding its central characters a little more seriously, it actually does work surprisingly well. While I never felt like Kick-Ass was a movie that needed a sequel, by the time this one started, I was surprised at how interested I was to see where these characters ended up. And while Hit Girl’s storyline is ripped straight out of Mean Girls and is just downright ridiculous, Chloë Grace Moretz does a fantastic job with what she’s given. She really has got to be one of the best actors under 18 working today, and just like in the original movie, despite the title, everything Hit Girl does is far more interesting than Kick-Ass himself.

Kick-Ass 2 is an okay sequel. It doesn’t improve upon or even come close to matching the quality of the original, but it isn’t an outright betrayal either. The humor is downright juvenile and sometimes quite unpleasant, bordering on misogynistic and homophobic (exactly what fans of Mark Millar are paying for, I guess.) But the story is somewhat compelling for something like this, the jokes not written by a 13 year old are often funny, and the action, however sparse, is thrilling. If this franchise is to continue with a third installment though, we need Matthew Vaughn back in the director’s chair, to cut back on the excess material from the comic and to ground this series back in reality. After all, isn’t that kind of the point?