Universal Studios is planning a massive shared universe of monster movies, featuring reboots of films such as The Mummy and The Wolf Man.

The studio is clearly hoping to get into the Marvel game with this, especially with the recent announcement that these films will be action-adventure, not horror.

With more and more news and speculation about this franchise coming out, now’s a perfect time to take a look back at Universal’s original monster franchise.

Universal was doing shared universe movies before it was cool. It all started in 1923 with The Hunchback of Notre Dame starring Lon Chaney, but it would end up growing into a massive franchise including movies like Frankenstein, Dracula andThe Wolf Man.

The original series of movies stretches from 1925 to about the mid-1950s, at which point most of the classic monsters were being retired (except for appearances in the Abbott & Costello movies). The Creature from the Black Lagoon in 1954 is generally considered to be the last of the Universal monsters, with a number of reboots and re-imaginings of the classic versions coming out after that.

For a while, these movies would each be getting tons of sequels, but there would also be movies that featured a number of the monsters like Frankenstein Meets the Wolf Man. There were also movies likeHouse of Frankenstein, which sounds like it would be a Frankenstein movie, but it also includes The Wolf Man and Dracula thrown in there.

These movies featured tons of great, classic characters, many of whom will probably be rebooted and back in theaters pretty soon. Not all of them are even monsters, but they’re characters that come to mind when recalling these movies and who we’d definitely like to see hitting theaters again. With that in mind, let’s take a look at some of the key characters in the Universal Monsters franchise.

10. The Creature from the Black Lagoon

There’s something about the design of The Creature from the Black Lagoon that is just so classic. It’s so obviously a guy in a suit, and yet there’s something appealing about it that still kind of holds up. It harkens back to a time when a major movie monster wouldn’t be entirely computer generated; it would be a handcrafted suit that clearly was a lot of work and which a real actor was actually wearing.

The Creature was a late addition to the Universal franchise, with its first movie being released in 1954, a few years after the classic era had begun to wrap itself up. But the creature is still worth mentioning, and the original movie still has some pretty cool, creepy scenes in it.

Will the Creature appear in the new franchise? I sure hope so. I doubt we’ll be seeing a full fledgedCreature from the Black Lagoon reboot at least for a while, but he’s such a classic character that I feel like he needs to be worked in at some point.

9. The Bride of Frankenstein

The only female monster considered to be part of the official lineup of monsters, the Bride of Frankenstein is a pretty iconic character who you’ll usually see at least once every Halloween. First appearing in the sequel to Frankenstein, Bride of Frankenstein, the Bride is a new creation to give Frankenstein’s monster a wife. Right from the first scene, her creepy, wide eyed stare is absolutely iconic, even though she doesn’t actually appear in much of the movie or really do a whole lot on screen. She only comes in towards the end and never really has a speaking role, but the fact that she was able to become so iconic just from a few scenes shows just how drawn to her audiences immediately were. Even without any dialogue, there’s something about that stare which is just absolutely haunting.

Though he’s obviously not a monster, Van Helsing is a vital part of the Universal monster-verse. From the original novel Dracula, the character appears in the 1931 movie played by Edward Van Sloan. We can see how great the character can be in this scene from the original film where he goes up against Dracula and pulls out the cross against him.

The character would reappear in a number of Dracula films including Dracula’s Daughter and the later Hammer movies. There was also, of course, the 2004 film Van Helsing, in which Hugh Jackman played the titular character. It seems like a safe bet that this character will pop up in the new monsterverse at some point, especially given that the action-adventure tone of the 2004 film Van Helsing seems to be more what the studio is going for with the new movies.

A lesser known Universal horror character, Countess Marya Zaleska is a pretty hypnotic and interesting character who appeared in the direct sequel to Dracula, Dracula’s Daughter. Played by Gloria Holden, the character definitely has that same creepy vibe we get from the real Dracula where we just can’t take our eyes off her.

She is also one of the first lesbian characters on film, which is pretty awesome when you consider that this was during the time of the Production Code Administration reviewing every film for content before release. She’s a unique, interesting and hypnotic badass who didn’t spawn a whole franchise, but still deserves to be included with some of the greats. I wouldn’t be so sure we’ll see her again in the new movies, but she definitely deserves an appearance at some point.

The Invisible Man was based on the classic H.G. Welles novel about a man who turns himself invisible. He’s played by Claude Rains, though you mostly only hear his voice as the Invisible Man spends most of the film covered in bandages. 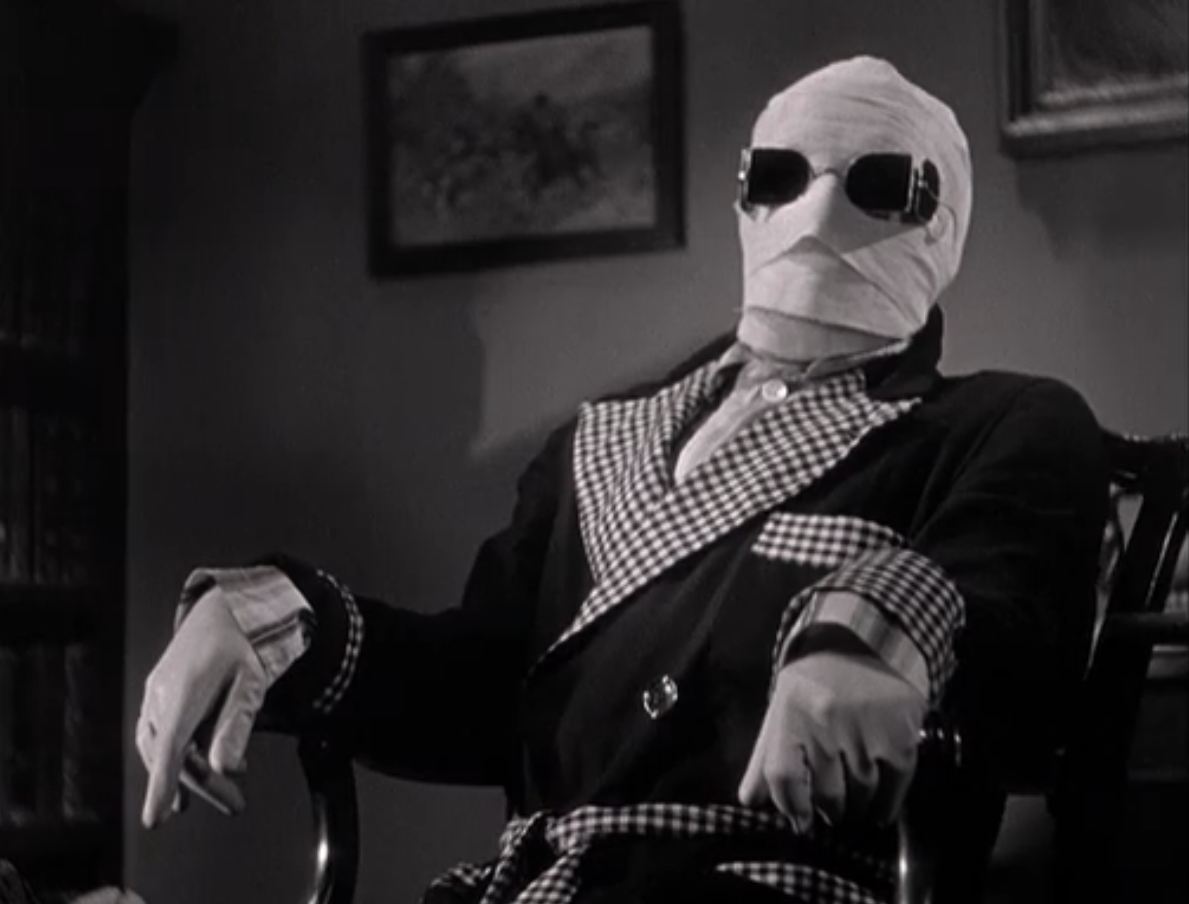 But The Invisible Man is an awesome, tragic character, and one who could definitely be given an awesome retelling in the new franchise. In fact, he is confirmed to be appearing at some point in the new movies according to IGN, and I think more than any of the others this is a character that could do for an awesome reboot.

The Mummy is the first character that we’re going to see rebooted in the Universal franchise, so he’s pretty significant in our list of our characters.

The character first appeared in the original 1932 classic The Mummy played by Boris Karloff. Karloff actually also played Frankenstein the previous year, which would be kind of like Robert Downey Jr. playing both Iron Man and Captain America nowadays.

The original movie is actually not at all what we typically associate with the Mummy character. It’s more of a love story where the Mummy, Imhotep, is attempting to resurrect the woman he is in love with. It’s a surprisingly interesting film, and not just the mummy mindlessly killing people like you might expect from pop culture.

In later films, the Mummy would become more of the character we know today, stumbling around in bandages killing people. This would begin with The Mummy’s Hand in 1940, which pretty much ignores the plot of the previous film and serves as sort of a reboot.

But whichever version we’re talking about, the Mummy is an absolute classic icon of horror, and so it makes sense that we’ll be seeing him first. The Mummy will be directed by Alex Kurtzman and released in 2016, as we previously reported. Hopefully the new reboot is able to distinguish itself enough from the Brendan Fraser films and do something different with the character. Wouldn’t it be cool for this one to focus more on the character of the Mummy himself, just like the original The Mummy did?

The Wolf Man will be the second film in Universal’s new franchise, and he’s a pretty classic character. The character originally appeared in the 1941 film The Wolf Man starring Lon Chaney Jr. He was pretty popular, and would go on to star in a few sequels and crossovers including Frankenstein Meets The Wolf Man.

Like a lot of these monsters, The Wolf Man is pretty tragic, and unlike the monsters who simply lurk in the dark or stumble around ready to kill the main characters, we really sympathize with the Wolf Man, part of what makes him such a popular character.

Part of what’s so cool about the Wolf Man is the incredible makeup, as we see in the transformation sequences. These are still pretty stunning when you consider that there were no computer assisted effects back then. All they did was have Lon Chaney Jr. sit for hours upon hours as the makeup was gradually applied. The new Wolf Man will probably rely more heavily on CGI, but hopefully there’s still some amount of makeup work in the new film to pay tribute to the classic era and what often made it so cool.

3. The Phantom of the Opera

The visuals alone of Universal’s The Phantom of the Opera immediately make it one of the most memorable of the Universal films. Released in 1925, Phantom was a silent film starring Lon Chaney. In many ways it’s the precursor to a lot of the movies on this list, and Chaney’s performance is absolutely brilliant. But maybe the star of the show is actually the makeup and design. The Phantom’s face is absolutely iconic, and though its not a character that spawned tons of sequels like Frankenstein or Dracula, and maybe not a character we’ll see popping up in the new franchise, in some ways Phantom is where it all started.

Frankenstein’s Monster is maybe the most iconic of all of the Universal monsters, and definitely the one that the studio most needs to get right in the new franchise. It all started in 1931 with Frankenstein, but the monster would go on to star in a many, many sequels including Bride of Frankenstein, Son of Frankenstein, Ghost of Frankenstein and Frankenstein Meets the Wolf Man. The character has been played by many different actors over the years, but really, there’s no competition. Boris Karloff is the monster, and there’s no topping his iconic portrayal of the character in the first three films. Over the years there have been many Frankenstein movies attempted, but none have really been able to recapture the magic of these early movies. We’ll have to see if Universal is finally able to bring Frankenstein into modern times with their new franchise, or if Frankenstein was really just something that was done so well by Karloff that it can’t be topped.

People are kind of dismissive of vampires nowadays with the popularity of Twilight and True Blood, but I’m hopeful that a great Dracula reboot can bring back the badass vampire into popular culture. When I think classic horror, Bela Lugosi’s performance in Dracula is immediately where my mind goes. It’s just without a doubt one of the best horror performances ever, and if the movie itself is dated in a few ways, Lugosi’s performance is totally timeless. There have been a number of other great performances of Dracula over the years, with the other most notable one being Christopher Lee, who definitely did a pretty amazing job. But Lugosi will always be Dracula, and I really don’t know if we’ll ever see another Dracula performance that can match it.

We saw Dracula on screen this year in Dracula Untold, a film which received negative reviews and was not exactly a smash hit at the domestic box office. Apparently though, Universal wants to tie this movie into their shared universe franchise. If this is our first indication of where the franchise is going, maybe these characters aren’t in such great hands after all.

One thought on “It’s alive! Ranking the 10 best Universal monsters”