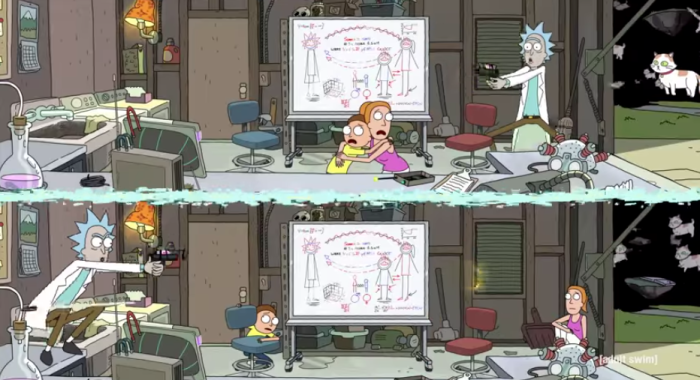 How confident are you in yourself? That’s a question at the core of Rick and Morty’s Season 2 premiere, “A Rickle in Time,” an episode which as usual plays with science-fiction tropes in a brilliant way that also services the series’ overarching narrative.

After six months in the show’s world and 15 months in ours, Rick, Morty and Summer finally decide to unfreeze time and let Jerry finish his march home. It’s great that the show actually follows up on this ending when it could have easily just gotten started and ignored the time freezing element of the Season 1 finale. They couldn’t resist addressing it, and that leads to incredible jokes like Summer forgetting to put a mattress under their neighbor, who has been in the middle of a fall the entire time. Following in the program’s tradition of dealing with the dark implications of its own heightened logic, we later see a crippled Mr. Benson, the neighbor who fell and did not have a mattress to catch his fall. Just another causality of Rick’s adventures.

The meat of this episode deals with the idea of uncertainty. Time is still highly unstable, and when both Morty and Summer are unsure about their actions, that splits time into two possible scenarios. In such a classic Dan Harmon move, we view both possibilities on screen at once, and so parts of the episode almost play out like one of those “spot the difference” puzzles. At one point, Summer is standing up in three of the scenarios, but in the fourth one she’s sitting down. It’s little things like that -or occasionally slightly bigger decisions like whether to put on the time collar – which make all the difference.

“A Rickle In Time” speaks to the concept of being sure about your life decisions at every turn. Rick is the one character whose actions are pretty much identical in all of the timelines, and that’s because he’s experienced, he’s seen it all, and he’s sure of himself and who he is. That new “I don’t give a fuck” catchphrase of his just might ring true. Meanwhile, both Morty and Summer are neurotic, fickle children, still trying to figure out their own identity and their place in the world. Summer also has the added jealously over Morty’s relationship with Rick. As this episode suggests, we tend to doubt ourselves when we’re younger, constantly hesitating over every choice we make however ridiculously small, and that can lead to a lot of chaos.

Here’s what these characters are sure about, though: Rick, Morty and Summer all care very deeply for one another. That might not always be apparent, but in the excellent final sequence, Rick from one of the scenarios sacrifices himself for Morty, plunging to his own death if it means his grandson will make it back. That’s a big step for these characters, especially poignant after the first two acts, in which Rick is particularly mean to both of his grandkids and literally explains mathematically how they’re both pieces of shit. He might think that, and they might actually be a pain in his ass sometimes, but he doesn’t love them any less.

Even if we might constantly be unsure of ourselves and our choices, our love for others should never be in doubt.

Meanwhile, the B-plot is a little less memorable but still tackles some similar ideas. Jerry and Beth hit a deer, and so naturally Beth wants to save it even though she’s only trained in horse surgeries. Jerry questions Beth’s abilities the whole way through, and eventually that uncertainty becomes contagious and infects Beth’s own self-confidence. But then Jerry realizes that no, his wife is amazing and she can totally do this, leading to a sweet ending where he cheers her on and Beth is able to save the deer’s life.

It’s not as flashy as the 64 timelines bits, but it’s a solid way to keep Jerry and Beth involved, and by thematically tying it into the rest of the episode by playing with decisions and confidence, this storyline doesn’t feel like a waste.

Really, when was the last time a show was this confident right out of the gate? Usually season premieres aren’t that mindblowing, with their job just being to set things back to normal and get us readjusted to the status quo. But Dan Harmon and Justin Roiland didn’t give a crap about that convention, instead delivering this stunning Season 2 debut, instantly one of the show’s funniest and most ambitious half-hours to date.