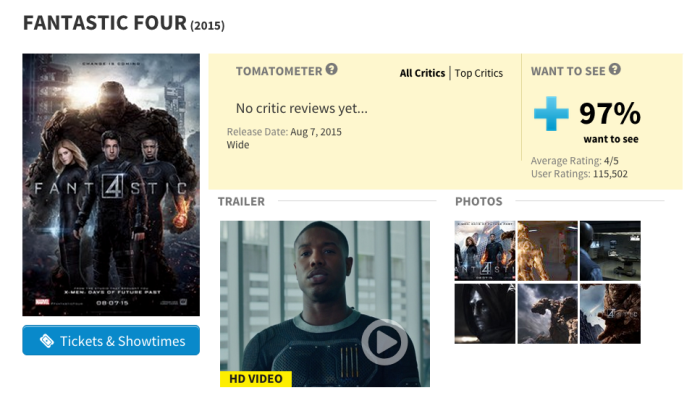 Fantastic Four is going to be a disaster, right? Probably? If you follow film reviews, you know that almost every major blockbuster is screened for critics so that positive reactions flow in, buzz builds up, and it all culminates in the opening weekend. Yet all reviews for Fantastic Four are embargoed until Wednesday, August 5th at 9PM EST, a little less than 24 hours before it hits theaters.

That is a bad sign, and almost 100% of the time a studio embargoes reviews like this, it’s because they have no confidence in the film and expect critics to trash it. This isn’t our first warning sign, and we’ve heard for months now that Fantastic Four might be headed down the wrong path. For one there was all the controversy surrounding Josh Trank, the film’s director who allegedly was a complete trainwreck on set, not communicating with the studio, showing up late, acting very isolated, and even causing $100,000 in damage to a rented house during production.

The reports have also stated that while Trank was not officially fired from the film, the producers had to step in to oversee some expensive reshoots earlier this year and bring in their own editor to add in the new footage. If the words “Josh Trank” and “fired” ring a bell, though, it’s because he was fired off of Star Wars not long after the Fantastic Four drama became public.

A few days ago, the cast of the film revealed that they haven’t even seen the final product yet. While the movie had its first screenings recently and reactions were generally positive, these were all just regular movie-goers, and that’s rarely indicative of the actual quality of the film. Early screenings are almost always positive, and audiences had amazing things to say about Green Lantern when that was first shown. We all remember how that ended up. When the studio is scared to let critics voice their thoughts on a movie and would rather stick to what the average Joe has to say about it on Twitter, that’s a pretty good indicator that they know their film sucks.

Just take a look at the latest trailer for the film. Using footage they had lying around, Fox snuck in Deadpool at the end, selling the movie on the fact that it will feature a Deadpool trailer. You can practically hear the desperation as they beg you to at least see their movie as a way to see the trailer for a film you’re actually interested in.

Oh, and the cast is already on the defensive, too. Miles Teller had this to say about how people are going to receive the movie: “This is not a movie we’re going to go on… Rotten Tomatoes, and it’s going to be at 80 or 90 per cent.”

Wait, why not? It’s not like superhero movies don’t do well with critics. Is it because this film is divisive? It’s really daring? Or it’s just a complete load of garbage? He’s trying to warn us, isn’t he? Remember he hasn’t seen the final product yet, so is he just judging from the quality of the script? How bad a director Josh Trank was? Or did the studio tell him to say that?

The movie opens in two days and reviews go public tomorrow, so we’ll know what the deal is soon enough. I’m still rooting for the film and hope it surprises us all, but more than anything I really do feel for Fox right now. They’re clearly scared to death over how this thing is going to do, and so far, it’s not looking good.