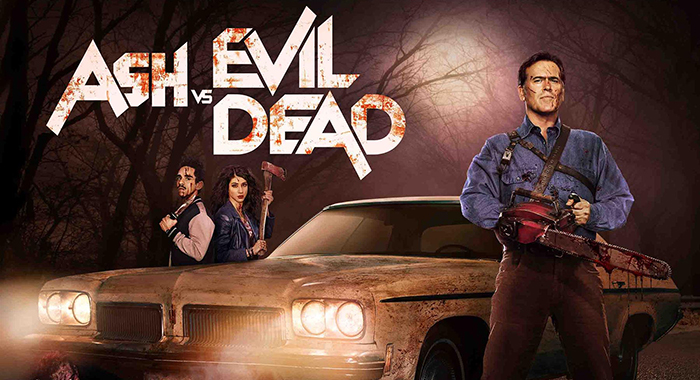 There aren’t nearly enough horror shows on television these days. Sure, there are series with horror elements, but rarely do they actually try to frighten viewers. Scream Queens is essentially a comedy that loosely follows the slasher formula, written by individuals with no fondness for the genre whatsoever. Bates Motel is a drama that happens to be set in a gothic horror setting. The Walking Dead is a soap opera taking place inside a zombie movie, which has become so massively popular in part because those who don’t like being scared can still watch it. “It’s not really about the zombies though…it’s about the people!” American Horror Story is…well, it’s American Horror Story.

This is not to say there’s nothing to admire in any of those programs, but where are the shows that will keep you up at night? Even a few like MTV’s Scream that veer slightly more towards horror fall apart because their ironic detachment makes it impossible to take anything seriously.

Now Sam Raimi, the king of horror comedy, has returned after 30 years to show all these other assholes how it’s done.

Ash vs. Evil Dead is both terrifying and comical, not allowing those two to overlap. The interplay between our leads is charming and Ash’s one liners are as quotable as ever,  but at the same time, the Deadites remain nightmare inducing, all the jolts are quite effective, and the looming threat of the titular evil is treated with sincerity.

Compare that to Scream Queens, which in theory is also a horror comedy. Yet it fails to resonate because while Ash is funny and then scary, Scream Queens never attempts to frighten without simultaneously winking at the camera. Take the Chanel #2 (Ariana Grande) death from the pilot. Here’s a moment when the killer is about to murder one of our main characters, so the audience should experience some amount of anxiety, right?

Instead, it’s made out to be a complete joke as Chanel and the Red Devil begin to text back and forth rather than speaking aloud. He writes, “I’m going to kill you now,” and she responds back, “Wait whaaaat???” A brutal stabbing ensues.

What should our reaction be? Obviously we’re not meant to be scared, as Murphy has undermined that by turning an important development into a total farce. It also isn’t really that entertaining, anyway. What are we doing here, guys? It’s not as if this is playing on any sort of established trope in the slasher genre. Is it supposed to be some sort of old man “kids always be textin'” bullshit? Regardless, the show is given an opportunity to leave viewers rattled, but it’s all ruined by a dumb gag.

Within the same sequence, Scream Queens wants to be both funny and creepy, and it fails on both accounts.

Now let’s take a look at Ash vs. Evil Dead’s pilot. Raimi’s episode is laugh out loud hilarious all the way through, such as in one scene of physical comedy when Ash drops and breaks an entire box of lightbulbs. Yet when the Deadites arrive, Raimi cuts the shit and gets down to business. A mere seven minutes into the episode, we get a spooky setpiece in which Amanda Fischer and her partner walk through a dark, seemingly abandoned house. The sounds of a woman crying are heard as a figure stands underneath a sheet, and the two detectives slowly approach as the tension builds and builds. Amanda pulls back the sheet to reveal…a normal looking woman crying. Just when we think all is well, she turns her head all the way around, her eyes turn white, and all hell breaks loose. Oh fuck.

There is absolutely no trace of humor anymore, and we don’t feel that we’re watching anything other than a depiction of pure evil. Does Raimi have Amanda let out some snarky piece of dialogue in order to ensure the audience doesn’t take this as too sincere? Does the Deadite do something wacky and crazy in order to ease the our stress? Nope, and that’s exactly what separates this from a Ryan Murphy project and what makes it the most outstanding horror comedy show of our time.

Three episodes of Ash vs. Evil Dead have aired so far, and even the non-Raimi outings have been spectacular. In episode two, we have lots of silly exchanges that rely on the ambiguity over whether Kelly’s mom is a Deadite, but once again, there are genuine stakes when appropriate. We care about Kelly and fear both Ash being right and him being wrong, and it all culminates in another amazing fight at the episode’s climax. In a clear callback to the films, Kelly’s mom begins to sing a lullaby, playing on the macabre nature of this demon briefly reverting back to the person it has possessed. When Kelly must accept the fact that her mother is truly gone, and when her mom suddenly morphs into a Deadite and throws Kelly across the room, this is all profoundly upsetting despite the goofiness of the previous scenes.

Now, Ash can still have his comebacks that we smile at, but the show is invested in making us uneasy as well. If this were a Murphy series, we would laugh at everything with the sense that we don’t have to care about any it, but Raimi and his crew reel us in by making the emotional consequences palpable, packing in all the scares they can, and also providing comedy separate from all that. We leave each episode having been equally shaken and amused.

In contrast, we leave each episode of Scream Queens having chuckled a few times but not having been remotely scared or having really been invested in the protagonists much, because unlike Ash vs. Evil Dead, Scream Queens’ lack of sincerity is its downfall. Hell, the title sequence literally features the lead characters winking at the camera.

Ash vs. Evil Dead features zero winking, and that’s why it will be remembered as a monumental achievement while Scream Queens will be quickly forgotten.