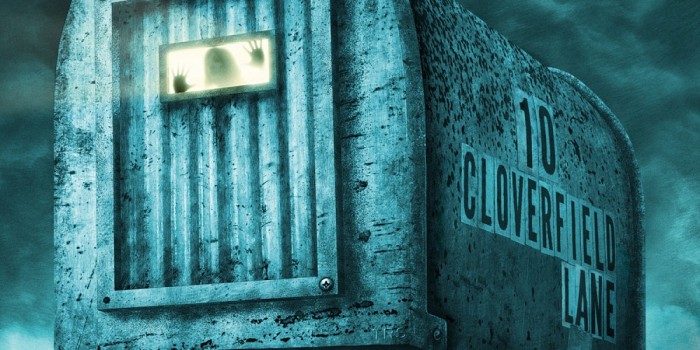 10 Cloverfield Lane is among the most exhilarating bottle movies ever made. Set almost entirely inside an underground bunker and featuring three characters, never once is there anything approaching a dull moment; Dan Trachtenberg propels us from setpiece to setpiece as if he’s directing an action blockbuster. A conversation over dinner becomes a pulse-pounding spectacle, with each word uttered landing like a nuclear bomb. Sadly, nearly all of Trachtenberg’s efforts are ruined by the fact that it’s called 10 Cloverfield Lane.

But I’ve already complained about Bad Robot’s decision to brand this as a Cloverfield installment. 10 Cloverfield Lane is so marvelous that it would be a disservice to discount it entirely because of the name.

Right from the first sequence, which calls to mind the opening 20 minutes of Psycho, I had a huge smile on my face that never went away. Without a single piece of dialogue, we understand everything we need to know about Michelle’s situation and state of mind. Lesser filmmakers might overload us with exposition at the start, but Trachtenberg goes in the completely opposite direction by not having a word spoken until several minutes in. The Hitchcock comparisons don’t end with Trachtenberg’s direction. If it was revealed that a resurrected Bernard Herrmann composed the magnificent score for 10 Cloverfield Lane, I would believe it.

And then there are the title cards, which smack the audience right over the head and let them know exactly what kind of experience they’re in for. Not since Gravity has silence been used so effectively in contrast with deafening commotion. Trachtenberg allows us a few minutes to settle in and munch on our popcorn, only to declare, “Enough relaxation. You’re mine now, bitches.”

Trachentberg stated in several interviews that his approach to the screenplay was inspired by video games, and that is apparent in the final product. As Michelle wakes following her accident, it’s very much like the introductory level of a first-person adventure, in which the player searches the room for clues about how they can escape. Like in the opening, the soundtrack is our only company as Michelle works through her predicament, attempting everything that the audience would think of (how refreshing it is to never be a step ahead of the protagonist). For the remainder of the film, with one minor exception, Michelle is present for every scene, so we experience exactly what she does. Despite not being shot in the same handheld style as the original Cloverfield, then, we’re always inside Michelle’s head the same way we were inside Hud’s.

Upon learning that 10 Cloverfield Lane primarily takes place inside an underground bunker, one might assume it to be tedious, yet that is far from the case. For the first act, Josh Campbell, Matthew Stuecken and Damien Chazelle ingeniously dole out information in tiny increments so that we are constantly piecing the whole thing together. One line of dialogue suddenly alters our personal theory and forces us to reevaluate everything that came before. And for what is essentially a bottle episode, the pacing is something to behold, as the film hurtles from compelling dialogue sequence to breathtaking action sequence at a consistent rate, making the time just fly by.

In fact, 10 Cloverfield Lane contains a few of the most shocking plot turns I have seen in a movie in some time. One beat in the third act comes so far out of left field that I still can barely get over it, and anyone who saw the film likely knows exactly what I’m referring to. When you watch enough thrillers in this vein, it takes something truly extraordinary to surprise you, and 10 Cloverfield Lane delivers on that front. Not just once, either.

All three of the leads are pitch perfect. Howard, played by John Goodman, will unquestionably be remembered alongside the most engaging characters of 2016, and if the Academy Awards did not typically ignore this genre, he would be in immediate consideration. Our opinion of him fluctuates every few minutes. Is he a maniac? A hero? A bit of both? We are never quite sure, and just when we’re confident in our reading of him, the screenplay throws a wrench in that. Goodman does not take his performance over the top, and no matter what we think of Howard at any given moment, it’s always clear that he believes he’s doing the right thing. Ultimately, that’s what makes for an interesting antagonist.

The final act will almost certainly divide audiences, with some seeing it as the natural culmination of what came before and some feeling that it clashes with the tone of the rest of the film. It’s difficult to talk about without spoilers, but I’m of the former opinion, and although it is certainly a sudden shift in tone, I found it to be justified within the context of the story. Prepare to debate the final 20 minutes at dinner afterwards.

I would recommend seeing 10 Cloverfield Lane and mentally replacing the title with The Cellar, the original screenplay’s name. That keeps things ambiguous enough that you go in not knowing what to anticipate, but the Cloverfield branding unfortunately gives us expectations the film is not prepared to meet. If this hit theaters as The Cellar with a mysterious marketing campaign, it would have blew my fucking mind. On the one hand, I left 10 Cloverfield Lane tremendously disappointed by the fact that the deceitful marketing abused hardcore Cloverfield fans. On the other hand, I can’t let that overshadow what is a stunning cinematic achievement, a consistently electrifying thriller with three-dimensional characters and unbearable claustrophobia. If the two Cloverfields are to be compared – and they shouldn’t be – they are both equally wonderful in their own ways.

One last word about the title…SPOILERS! STOP READING HERE IF YOU HAVE NOT SEEN 10 CLOVERFIELD LANE.

Aside from the branding letting me down in that I wanted a proper Cloverfield sequel, it presents a larger issue in that the name shatters any sense of mystery. If The Cellar was kept as the title, we would genuinely have no clue whether Howard is right. Is this simply a kidnapping story? Was there an attack? Was that attack extraterrestrial? But it’s called Cloverfield, so not even for one second did I consider that Howard could be 100% incorrect. As The Cellar, the third act would have come out of nowhere as a crazy twist. As is, though, it feels inevitable. We were waiting for monsters the whole time, and then they show up, and it’s not a big deal. What could have been one of the great twists of all time was ruined because of a shitty marketing gimmick. What a shame.