In some ways, “Oathbreaker” feels like the real start of Game of Thrones Season 6. We finally got the inevitable Jon Snow resurrection over with last week, and so now the series can move forward into new territory. With some other storylines, the show is still treading water, and “Oathbreaker” all in all is not nearly as significant an hour as last week. But it has become clear that the season is on a path towards greatness, and I reckon that in a few weeks, it will be hilarious that we considered Episode 2 to be the explosive one. 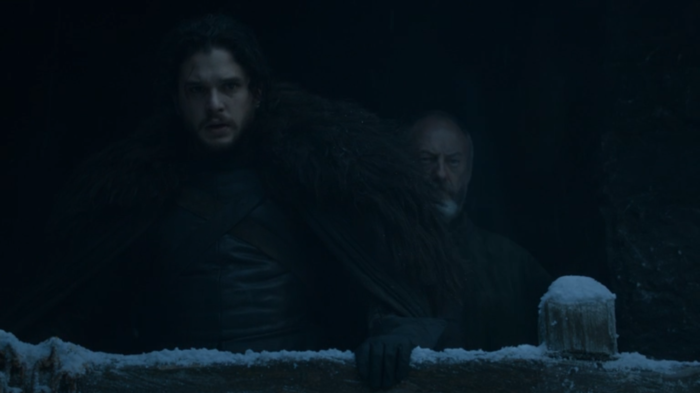 We got the confirmation of what we all already knew last week, and so now we finally get to witness the long-awaited scenes of post-death Jon Snow. Kit Harington plays these sequences magnificently. He doesn’t wake up happy to be alive, nor is he even really confused about what’s happening. This is a man who is fully, uncomfortably aware of the fact that he has just been assassinated, and perhaps worst of all, that there is nothing after death. He will now have to go on living fully conscious of the fact that he could die at any time for any reason (and probably won’t have a magic witch nearby), and he no longer has anything to look forward to on the other side.

That, naturally, brings us a darker Jon than we’ve seen in the past, one who is willing to look a kid in the eye as he chokes. Granted, he isn’t that much darker, and it’s not as if he takes any pleasure in Olly’s demise. But surely the Jon of a few weeks ago would have at least considered sparing the farm boy, right? Last season he did behead Janos Slynt for refusing to obey a command, which I think it’s fair to say is a lesser crime than assassination. But that was a fully-grown adult, and this is a child. A child who has been through so much with the wildings that his decision to kill Jon was kind of understandable. Either way, I certainly did not cheer as Olly died, and odd to me that some did.

Jon has now left the Night’s Watch, and I’m super curious to hear about his decision-making process. Is he just completely through giving a fuck, and so he does not care about abandoning the Watch? Or is he embracing the gigantic loophole of the fact that the oath he took is until death, and technically he did die? I’m not sure if you’re quite following the spirit of that commitment, Jon. But hey, if it means we’ll get to see him storm Winterfell and kick the crap out of Ramsay, then screw commitments. 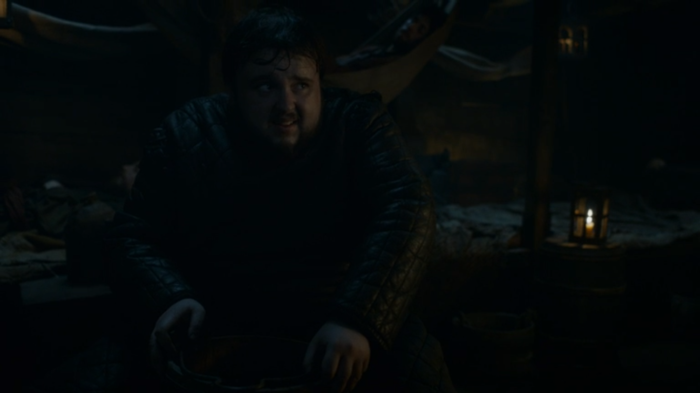 With Sam and Gilly, we get the type of scene that has occupied so much of Game of Thrones’ screen time: one where not much occurs, but the audience simply must be reminded that a storyline still exists. In this case, Sam and Gilly are still headed to Oldtown, although he informs her that she can’t come and must instead go to stay with the Tarly family. How long have these two been on this journey? This conversation has never come up? When was Sam going to hell her if she didn’t ask? Anyway, Sam also vomits a bunch of times.

Here we have a sequence that immediately had all book fans going wild and probably left show-only viewers wondering why they should care at all. That describes at least 30% of Game of Thrones, doesn’t it? A young Ned Stark fights a bunch of Targaryen soldiers in an attempt to save his sister, Lyanna Stark. Just as he’s entering the Tower of Joy, the Three-Eyed Raven ends the dream, as he’s apparently big on cliffhangers. He’s a regular R.L. Stine.

The fight sequence itself is decent, and although many were disappointed by the decision to cut the scene short, I think it was a wise move. Now, non-readers can have a bit more time to take this in, as rushing straight-ahead into the major reveal about Jon Snow’s parents would be a bit much. Is it as obvious to everyone watching that in the tower is Lyanna Stark and a baby Jon Snow? This feels like another “Jon Snow resurrection” situation in terms of stretching out something we all know is coming, but maybe that’s just the case to those of us who pour over fan theories for hours.

I’m particularly interested in the constant hints that Bran can possibly interact with the past. In this episode, Ned seems to sense that Bran is standing behind him. Could this possibly be leading towards a storyline in which Bran actually attempts to change events, maybe trying to prevent his father’s execution or the Red Wedding? Or maybe he’ll just grab himself a Sports Almanac and call it a day. 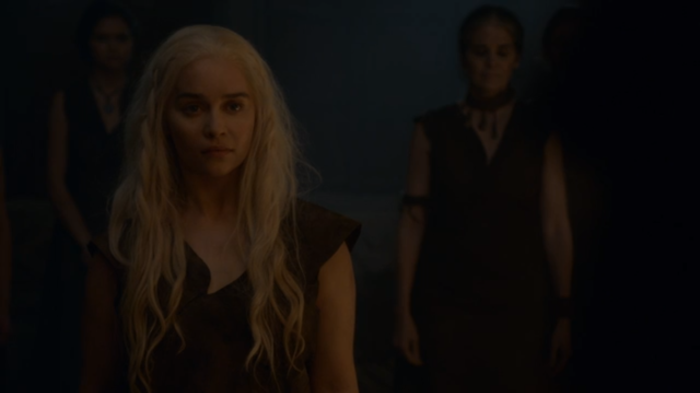 Honestly, I have absolutely no idea where Dany’s storyline is going or why we should care. She gets brought in before the Dosh Khaleen, she’s stripped naked and, as far as I understand, told that some other dudes will at some point decide what is to be done with her. What is going on with this? I can’t recall a worse instance of a show stalling for time.

Meanwhile in Meereen, not much is really happening either, yet I thoroughly enjoyed this episode’s Varys and Tyrion scenes. Varys’ in particular felt like classic season 1, and although I wasn’t all that invested in the mystery of who is leading the Sons of the Harpy, I will never grow tired of watching Varys walk around rooms and scheme. I particularly loved him responding to a particularly fiery rant with a blunt “I understand.” Meanwhile, Tyrion delivers the following line which is a pretty concise summary of all of Game of Thrones: “The true history of the world is a history of great conversations in elegant rooms.”

If the show has to stall, it’s these types of enjoyable character interactions that I’d like it to stall with. Not weird shit like the Dany plot that seems to be building all this manufactured drama around a storyline that is not remotely interesting.

At long last, the appearance of the most influential but least observed characters in all of Game of Thrones: Varys’ “little birds”! Qyburn recruits them as part of a whisper campaign to spread rumors about Robert Strong and basically scare the shit out of everyone. Though really, is it necessary to hire people to spread word of a scary ass 7 foot tall zombie that’s going around beating the shit out of random folks? I feel like that story would get around on its own.

Cersei also takes over the small council and has Jaime join her. She’s not really the queen, as Olena reminds her, but then again Cersei never appeared to give much of a crap about that reality. And Tommen finally does something in this episode! He heads over to the High Sparrow, but the kid is no Joffrey and immediately lets his guard down after being told a story about how cool mothers are. Why on Earth is Tommen not putting to death this borderline-terrorist who holds no actual power? I never thought I’d say this, but he could learn a thing or two from his brother. 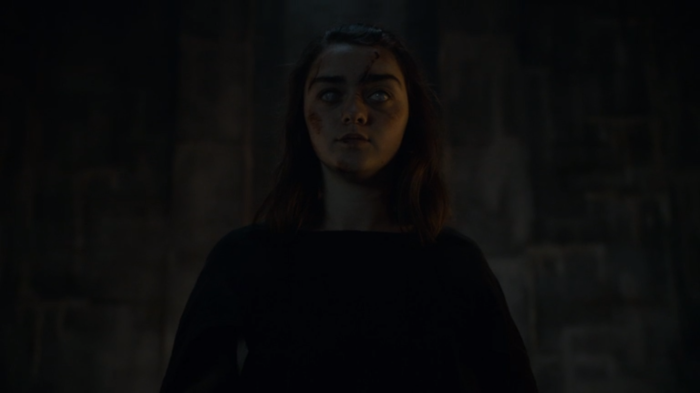 Just when I was worried Arya’s storyline would consist of nothing but her being beaten over the head for 10 episodes, we get this awesome montage where her fighting improves and she’s able to defend herself despite being blind. Jaqen finally gives her her sight back, although I’m not totally clear why. Is it just that now she’s gotten good at defending herself? Is it that she went long enough without telling Jaqen her name? Whatever the reasoning is, I’m just glad the “Arya is blind” stuff won’t be stretched out for quite as expected. Maybe she can actually do something cool this season? Knowing this show, the fact that we think that probably means she now will literally not show up until next year.

Over at Winterfell, Smalljon Umber presents Ramsay with a gift: Osha and Rickon. I’m not totally sure I buy the Umbers pledging loyalty to the Boltons, and a few elements of this scene make me optimistic there might be a broader plan at work. First of all, Smalljon references the fact that Roose swore loyalty to Robb Stark, only to betray him at the Red Wedding. Theoretically, this is a way to demonstrate why pledging loyalty doesn’t matter, but could it also be a hint that the North, as they say, remembers? Smalljon then presents Ramsay with the head of Shaggy Dog, but would anyone really be able to tell the difference if he just presented Ramsay with a random wolf’s head? Perhaps this is the wolf-equivalent of Theon burning the random farm boys in Season 2? I sure hope so, because if this entire season goes by without any house even attempting a rebellion against the Boltons, I will be so pissed.