Something good happened on Game of Thrones and I don’t know what to make of it.

This week’s episode, “Book of the Stranger,” opens with the reunion of Jon Snow and Sansa Stark, which would be a bit more emotional had this not literally been their first interaction in the series. The eventual reunion of Arya and Jon will certainly be much more affecting, especially after their goodbye scene all the way back in Season 1. But hey, we’ll take any Stark reunion we can get for now.

A lot of fans were worried that the two would just miss each other, which seemed like exactly the kind of dick move David Benioff and D.B. Weiss would normally indulge in (remember the Jon and Bran near-miss in Season 4?), but thankfully that was not the case. Jon is gathering his things at the beginning of “Book of the Stranger” because he wasn’t about to just storm away from the Wall without even a damn coat. He justifies abandoning his post by telling Edd that his vow is until death, and he died, so he really is using that shaky reasoning. I wonder at what point in the resurrection process this technicality occurred to Jon. Did he wake up and immediately think, “Oh, sweet, now I can leave the Watch because of some weird loophole”? To be honest, I kind of wish Jon had just said “screw my oath” and flat out decided that staying with the Watch wasn’t worth it, but maybe that would be too dishonorable for most to accept.

Thankfully, Jon and Sansa don’t meet and then immediately part ways; it looks like they’ll be together for quite a while, as Jon promises his sister he’ll watch over her or Ned Stark’s ghost will come back and murder him. (Doesn’t the phrasing “come back” imply Ned’s ghost has already visited Jon? If not, wouldn’t the phrase be “come back as a ghost”? Crackpot theory time!) Later, their mission becomes clear: they’ll take back Winterfell from Ramsay Bolton, an idea that comes up early on and is decided upon when Ramsay sends a threatening letter.

For how much we’ve complained about Sansa Stark’s lack of autonomy, I appreciated the fact that it was she who made the argument for taking back Winterfell. The Battle of the Bastards will happen because she passionately declares that Roose Bolton must be stopped, not because she was dragged into the fight against her will. She even tells Jon that she’ll take back the North herself if she has to, and I completely believe her.

A quick question about this, though: at what point will Sansa find out that Jon recently died and was resurrected? Did this come up off screen, or does she not know yet? You’d think “I literally died and came back to life” would come up in the “So what have you been up to” conversation.

At the Vale, we check in with Littlefinger and Robin Arryn, the latter of whom is given very little dialogue seemingly to disguise his jarringly low-pitched voice. Puberty is a real bitch. Littlefinger has just found out about Sansa’s escape from Winterfell, and so he and Robin decide to use the Knights of the Vale to help Sansa out.

Littlefinger’s motivations, as always, remain as enigmatic as his accent. Last season, he was making a deal with the Boltons to marry off Sansa, and now he’s helping fight against them? Does he just see this as an opportunity to seize the North for himself, or seize it for the Vale but rule it alongside Robin? Was this his plan all along? He can’t be helping Sansa out of the goodness of his heart, right? Also, what has he been up to all this time? We haven’t seen him in six whole episodes; was he just riding along in his carriage and finding a birthday gift for Robin that whole time? I know he said that bird is hard to find, but come on, dude…

But enough of these exciting developments regarding an impeding war in the north. Now, we get to the part of the episode we all tuned in for: updates on Meerneese politics!

Tyrion meets with representatives from Astapor and Yunkai, who have allegedly been funding the Sons of the Harpy (those masked dudes who tried to assassinate Dany last season). They’re angry that Dany strolled through Slavery’s Bay and abolished slavery everywhere without thinking about potential ramifications, and it’s true that Dany’s idealism and shortsightedness is her biggest weakness. Tyrion offers the slave-owners a deal: they will be allowed to continue slavery for seven years, after which it must be phased out and they will be compensated for their losses.

It makes practical sense, but surely Dany will not be happy with a negotiation that allows men, women and children to endure seven more years of a horrible existence. Tyrion has the experience in politics to know that this may be the best they’re going to get, but Dany isn’t about practicality and compromise; she’s about fire and blood. It should be interesting to see Dany and Tyrion come face-to-face again and discuss what he’s made of Meereen since she’s been gone (Spoiler alert: she will not be a fan)It was a wise move to have Tyrion drive this plot, as otherwise I imagine everything in Meereen this season would be basically insufferable. As is, it’s moderately entertaining to watch Tyrion scheme and make deals, but is anyone actually, truly invested in anything happening in this part of the world? Dany’s storyline has had bursts of excitement over these past few years – one of which comes at the end of this very hour – but the episode-by-episode story beats are usually pretty tedious.

Thankfully, Dany’s own storyline at the Vaes Dothras basically comes to an end this week. Jorah and Daario dramatically break into the city to rescue their queen, but they turn out to accomplish nothing. The two happen to run into her while she happens to be walking outside, and she already has a plan. She’s got this.

In the episode’s climax, Dany murders the Great Khals by just standing there and knocking over some conveniently-placed pillars of fire. Her smirk throughout the sequence, starting from the moment she fully realizes she has the upper-hand, is fabulous, as is the reversal of the cliche “rescue the princess!” plot. But the actual setpiece is a little underwhelming compared to similar scenes like Season 3’s “Dracarys” and Season 5’s Drogon escape. We logically understand that something cool is unfolding, but the choreography is flat and uninteresting. While those earlier action bits were incredibly cinematic, this very much feels constrained by the limits of television budgeting.

Over in King’s Landing, Margaery is finally allowed to see Loras, who is a complete, Reek-style mess. He just wants to give in and do what the Faith Militant want so that the pain will stop, which is a reasonable place to be in. I do have to wonder to what extent these prisoners are being tortured. There’s obviously more happening than what we’ve seen on screen, right? Why did we spend an entire season watching Theon be brutally tortured by Ramsay, but now suddenly showing characters getting harmed is totally off limits? Granted, I prefer the subtly we’re getting now, but I’d still appreciate some clarity about what’s going on here. 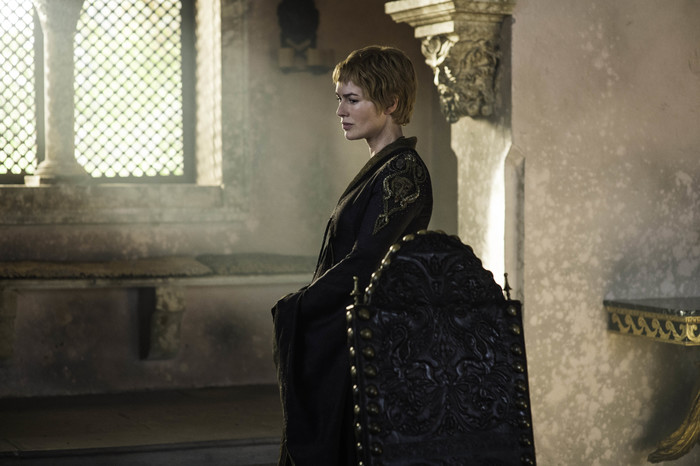 Anyway, that won’t matter for long, because Cersei is about to start a God damn war. Tommen is cautious to do anything about the High Sparrow, either because he’s worried about Margaery or because the guy kind of began to win him over last week. Tommen reveals to Cersei the secret that the High Sparrow told him in “Oathbreaker,” and although the audience is not let in on it, it’s enough to inspire her to immediately stroll into the Small Council and demand the army rescue the queen.

Or was the “secret” just that Margaery is going to do her Walk of Atonement? That doesn’t seem like much of a secret – it’s more the logical conclusion of events currently ongoing – nor does it appear to be true because she is dead set on not giving in earlier in the episode. Maybe the Sparrow fed Tommen false information, knowing that he would tell Cersei and it would provoke an attack on the Faith Militant? Or is the secret something else entirely that both Tommen and Cersei are keeping to themselves?

Theon arrives home, and Yara is understandably still pissed at him about that one time she planned a whole rescue and he refused to come with. Awkward! She assumes he returned home when he heard of the Kingsmoot – it is a massive coincidence – wanting to seize the Salt Throne for himself, but he instead declares that she should rule the Iron Islands. Did he say this just to prove to Yara that he is not there to take anything from her? Or does he genuinely believe she would be the best ruler? It doesn’t seem like the two really have the best relationship, but then again, Theon really does need a friend right now, and I doubt Euron is about to embrace him with open arms.

And in Ramsay news, here’s a shocker: he does something else sadistic this week, murdering everyone’s favorite character, Osha. I’m starting to get the sense that this guy isn’t all that nice!

Wouldn’t it be cool if there was something to the Ramsay plot other than him doing increasingly sinister things every episode? Can something else start happening in the north? At least his murder of Roose and Walda had a dramatic impact of the storyline, but are we seriously just going to have to sit through him torturing Rickon for several episodes until Jon and Sansa arrive? That’s it? I’m not sure I have the stomach to sit through that again, but at least this will for sure be Ramsay’s last season…right? Right?