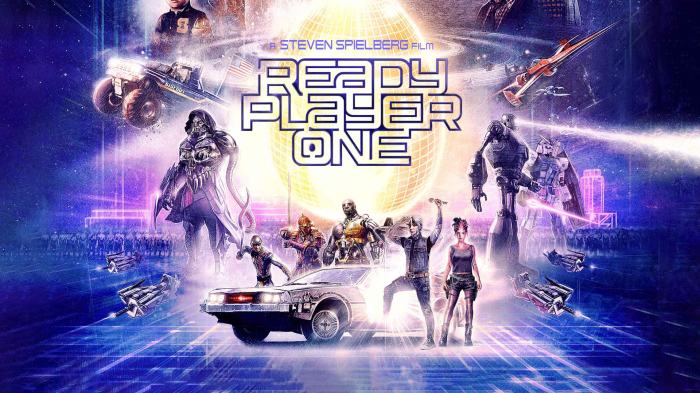 Is Ready Player One a dark story about a society so obsessed with wallowing in nostalgia and wasting time on an online game that it has no issue letting the real world crumble? Or is it a loving ode to geekdom and a celebration of how nostalgia and online worlds can bring people together and serve as a much-needed escape? That’s a question Steven Spielberg needed to answer when choosing to adapt Ernest Cline’s 2011 novel, but based on the finished film, I’m not sure he ever figured it out.

All throughout Ready Player One, there are hints that story might evolve into a condemnation, or at least a mild criticism, of the very thing we thought we were here to celebrate. Wade Watts points out early on that in 2045, people have given up on trying to solve the world’s many problems; now, they just hope to outlive them. Lines like these seem to suggest Spielberg is leading to some sort of an epiphany about the dangers of escapism.

Yet this doesn’t really wind up amounting to much. In the end, Watts saves the Oasis by defeating an evil bad guy who wanted to — gasp — put ads in the game, thanks to his knowledge of some obscure piece of pop culture trivia, because as the film has taught us, nothing measures your value as a person like random bits of information about Atari 2600 games.

So the movie has come down on the side that the Oasis is a good thing, and there are no real dangers associated with escapism, right? Well, not exactly. After getting the last key, Wade speaks with James Halliday, who gives him a generic warning about devoting too much time to fantasy worlds because only reality is real. Then we get to the very end, where Wade, after gaining control over the Oasis, decides to close it on Tuesdays and Thursdays so people can appreciate the real world.

I have a few pretty basic issues with this and questions about what Spielberg wants us to come away thinking. First of all, the whole “reality is real” idea is totally unearned and barely present at all in the movie until Halladay randomly says it. It doesn’t help that Wade has basically no arc and seems to learn very little. I didn’t get the sense that he was someone who was getting sucked into the game to a dangerous degree at the expense of spending time in the real world or anything like that. After all, he wants to meet Samantha in real life pretty quickly.

The idea is that Halladay spent too much time obsessed with the Oasis, and he wants everyone to learn from his mistake. But that doesn’t really seem like a lesson that any of the characters in this movie actually needed to learn, so it falls flat. Besides, Wade had a pretty good reason to be spending so much time in the game; he was working towards a practical goal that would help improve his life, i.e. winning Halladay’s prize.

But there’s another issue I have with the ending. The idea of closing the Oasis on Tuesdays and Thursdays so people can enjoy their lives would be a fine idea had the movie not established that people’s lives in this universe are fucking terrible. This is a world ravaged by overpopulation, climate change, and poverty, and it just generally sucks to be alive, which seems to be the main reason people flee into the Oasis.

It would make sense for Wade at the end to feel inspired to invest some of his newfound wealth into improving the real world rather than the virtual Oasis. But instead, he makes no effort to do so, giving a big middle finger to all the suckers out there living in poverty by offering no assistance and yanking this giant resource away from them twice a week so he can totally bone down with his new girlfriend.

At the very least, if Wade isn’t going to give back at all, it might have worked better if his message was that he wanted to close the Oasis so that people could use that time to improve the world around them in some way. Instead, he just sort of leaves people with a holier-than-thou “kids always be texting!” message that’s pretty easy to espouse as a privileged kid who just got handed his entire fortune because he knew some bullshit about Adventure.

As much as I enjoyed Ready Player One for what it was, I can’t help but see it as a wasted opportunity. In 2018, at the height of our society’s love affair with nostalgia — the same week that a reboot of Roseanne became the biggest TV phenomenon of the year — this story couldn’t possibly be more relevant, and there was a tremendous opportunity for the movie adaptation of Cline’s novel to say something interesting about where we are today.

Yet although the film itself flirts with a message about waking up to the problems around yourself and doing what you can to fix them rather than fleeing into fictional worlds, the ending — in which the character makes no attempt to solve his world’s problems and instead flees into a fictional world — totally undercuts that. I have no idea what I’m supposed to take away from Ready Player One other than that Spielberg knows how to make a fun blockbuster and that The Shining was a pretty good movie. But hey, he does, and it was.