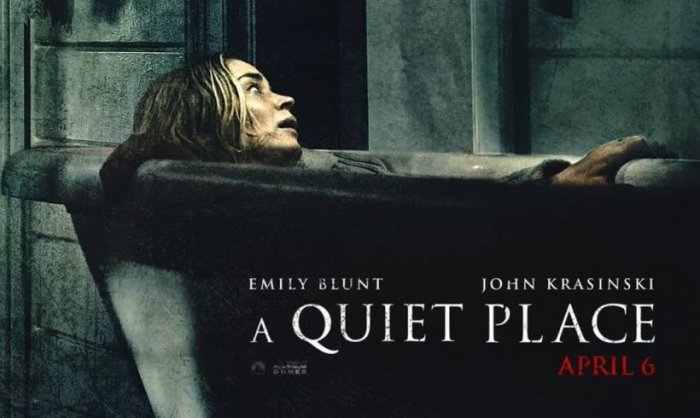 *This post will contain spoilers for A Quiet Place*

The premise of A Quiet Place sounds like something a screenwriting professor would come up with as a way of explaining the principle of “show, don’t tell.” If you want audiences to understand how the world of your film works, the teacher would say, you shouldn’t have a character sit down and explain it. Instead, you should simply show examples of it working. Now, as an exercise, let’s say you were writing a movie where the lead characters barely ever speak because monsters will kill them if they make a sound. How would you, without dialogue, ensure that the audience understands the rules of this post-apocalyptic world?

John Krasinski answers that question with A Quiet Place, a restrained film that proves that silence is terrifying. But although this is pretty close to an objectively excellent horror movie, one of its only flaws is that Krasinski sometimes takes the easy way out when it comes to the exposition, violating the “show, don’t tell” rule and not seeming to fully trust the audience.

To be fair, Krasinski was in a tough spot, having to establish several key things early on. First, we need to know that the monsters are heavily armored, and so the characters cannot simply pick them off with a sniper from the top of a grain silo. The movie also needs to establish that the creatures are blind but drawn to sound.

Krasinski had the opportunity to really impress by managing to communicate all of this through actions alone. Instead, early on in the movie, he focuses in on a whiteboard that clearly lays out everything we need to know in a neat package, with awkward phrases like “WHAT IS THE WEAKNESS?” and “ATTACK SOUND.” This is pretty much the total opposite of showing and not telling; Krasinski is telling us as directly as he possibly could.

Even worse, it’s actually unintentionally hilarious because why on Earth would this whiteboard be necessary within the universe? It seems to be just for Lee as part of his own investigation, but you’d think facts so basic — like that the monsters are blind and drawn to sound — would not even need to be written down at all. It immediately takes us out of the movie because it’s so obviously something that’s just there for us to see.

It would have been so much more satisfying if all of the rules of the world had been communicated through actions alone. We can obviously tell that the monsters “attack sound” just based on the opening sequence, in which Beau is picked off directly after setting off a loud rocket toy. So the whiteboard wasn’t even needed to explain that aspect of things. In terms of establishing that the monsters are armored and blind, this might have been more challenging, but surely Krasinski could have found a more visual way to get that across. It was just disappointing to see a film almost fully commit to a more restrained way of storytelling, except for this one big clunky piece of exposition that drags it down.

This would be a really insignificant nitpick if the whiteboard only appeared a single time at the very start of the film; Krasinski would sort of be saying, “yeah, I know this is annoying, but I’ve got to just quickly establish this stuff, and there’s no better way.” But no, it actually comes back in a key moment at the end when Regan, having just realized that her cochlear implant makes the monsters vulnerable, looks over at the board to see the question “what is the weakness?” The movie has already telegraphed this whole thing way too much, but now, it doesn’t seem that Krasinki even trusts us to understand that Regan has just discovered a weakness; he thinks we need an additional shot of the whiteboard to hammer that in. It’s almost as bad as if she had just proclaimed out loud, “I just realized the monsters’ weakness!”

Krasinski also makes heavy use of newspaper clippings, which is once again lazy but is more forgivable since it would make sense for Lee to be collecting these during his research. (It does certainly raise the question of who exactly was operating loud printing presses after these monsters were already loose on the Earth, though.)

Of course, there are instances of showing and not telling in A Quiet Place. When we first discover that Regan’s cochlear implant can disorient the monsters and expose their flesh, nobody says that; it’s just something we see happen. The movie doesn’t need to beat into our heads the idea that red lights are the Abbott family’s signal for when Evelyn has gone into labor, either. In general, the film also wisely leaves out many of the details about how we got here and what the backstory is. We never find out where the aliens come from or why they’re here, and the film is better for it.

But Krasinski came so very close to making one of the best “show, don’t tell” movies of all time with A Quiet Place. Unfortunately, he only gets about 80% of the way there thanks to that damn whiteboard.